In the past week we covered claims from Turkey that the Yellow Canaries are interested in signing the Belgian midfielder, with reports he could leave the club following the arrival of Ole Gunnar Solskjaer.

According to AMK Spor, Fenerbahce are very serious about signing Fellaini, and the Turkish club are ready to offer him €7.5m for an 18 month contract.

According to the newspaper, Fenerbahce are now waiting for Fellaini’s response and the initial reaction coming from the player’s camp is that he would be interested in continuing his career in Turkey. 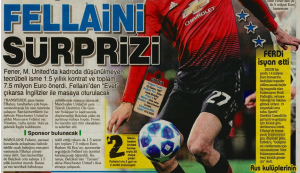 The player is contracted to the Premier League club until June 2020 after extending his contract last summer.