Fotomac report Besiktas are still interested in Everton attacking midfielder Nikola Vlasic and the Turkish club are poised to make an offer to sign the Croatian international at the end of the season.

Vlasic is currently on loan with CSKA Moscow, where he’s impressed this season.

The Turkish newspaper reports Vlasic is the first name on Besiktas’ wanted list and the Super Lig club are looking to find a way to fund the transfer.

It’s reported that Besiktas will look to sign Adem Ljajic from Torino on a permanent basis for €6.5m and then sell him to the Schalke to make a quick profit.

According to Fotomac, Besiktas will then use the profit to make a loan offer for Everton’s Vlasic. It’s also claimed Besiktas were interested in signing Vlasic before he moved to Everton in 2017.

However, his agent has spoken to the Russian media in recent days and told them his client wants to remain at CSKA beyond this season. 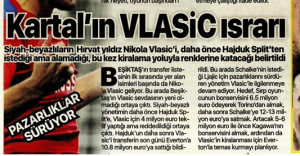 Vlasic has scored 8 goals in 25 appearances for CSKA in this campaign.