Aston Villa took Mbwana Samatta from Genk in January 2020 when they desperately needed a new striker after Wesley Moraes suffered a serious injury that same month.

However, the Tanzania international managed only one goal in 14 league matches in the second half of last season, leading Dean Smith to not include the 28-year-old in his plans for current campaign, forcing Villa to loan him out to Fenerbahçe.

While the Turkish club retain an option to make his stay permanent, their plans for the Villa owned player are yet to be announced.

The striker, on the other ham, is drawing attention from his former club, Genk, and Het Belang van Limburg on Thursday explain Samatta is on the Belgian side’s summer transfer target ‘list’.

Genk sporting director Dimitri de Condé is busy preparing for a plan for the upcoming window. 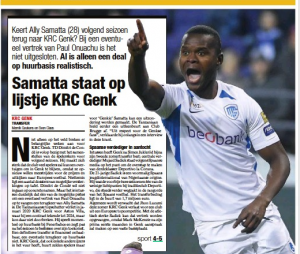 Although he hasn’t made it public, HBVL explain the Jupiler Pro League side’s chief will have to bring in a new striker if star forward Paul Onuachu decides to leave the club.

This is where the Villa player would fit in as a possible candidate to replace the Nigerian.

That being said, Genk won’t be in a position to buy the Samatta outright and a loan deal seems to be the more realistic option.

The Jupiler Pro League side rarely take players on a temporary deal, but HBVL points out Genk are ready to make an ‘exception’ in signing Samatta, but only if Onuachu moves elsewhere in the summer.