Fanatik report Galatasaray are considering making a move for Crystal Palace midfielder Cheikhou Kouyate ahead of the summer transfer window.

It’s believed the 31-year-old is looking to leave Crystal Palace, and Gala manager Fatih Terim is keen to complete the signing of the player, whom he was previously interested in.

According to Fanatik, Terim particularly likes Kouyate’s versatility, as he could use the Senegal international in both midfield and defence, and has filled in at centre-back on numerous occasions due to injuries in Roy Hodgson’s squad. 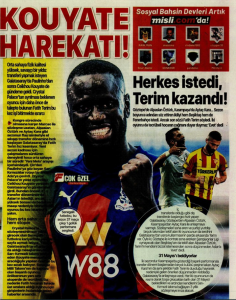 Cimbom fans, according to some reports, have been sending Kouyate’s messages through social media urging him to join their club.

It’s claimed the Super Lig side are now expected to make first contact with the player soon.

The former West Ham United player featured in 37 games in all competitions for Crystal Palace this season, scoring one goal.

His contract at Selhurst Park will expire at the end of June 2022.