Sundays tend to be a day of rest for the vast majority of the population around the world, but not Corriere dello Sport.

No, Sunday, for the Italian newspaper, is the perfect time for them to ramp up the transfer dial to 11, as they did this week with a story about Chelsea’s Gary Cahill.

According to Corriere, the Blues’ defender is one of a handful of centre-backs Milan are looking at for January as they face an injury crisis at the position.

Losing their third of the season, as Alessio Romagnoli suffered a calf injury, the Serie A outfit were ready to, ‘in the next few hours’, ready to evaluate a list on which the Chelsea defender is said to feature. 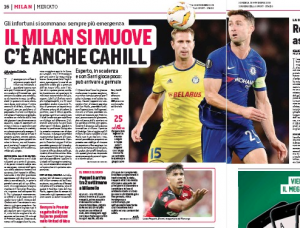 Out of contract at the end of the season and barely featuring under Maurizio Sarri (six appearances in all competitions, and just 21 minutes in the league), the 32-year-old could arrive as soon as January.

Corriere state Milan would be ready to ‘listen to’ his financial requests, and could quickly open a dialogue with Chelsea over the centre-back.

The two clubs are on good terms after successfully completing a loan deal for Tiemoué Bakayoko, meaning contact would be relatively easy to make.

As a short-term option, and with Gary Cahill perhaps taking this as a last chance to enjoy an adventure abroad, it’s not the worst idea.

We’ll see if this develops over the coming weeks, but it just seems to be an idea for now rather than anything concrete.