Lazio are exploring the idea of a move for Tottenham defender Danny Rose as they hunt for a new left-back this summer.

That’s according to Corriere Dello Sport, who say that Rose is the latest name to be added to Lazio’s ‘shopping list’.

The newspaper reports that contacts have been made with the defender, who is currently on loan at Newcastle United, in recent weeks to ‘understand the margins’ of any potential deal.

They say they are ready to ‘invest’ in the Tottenham defender as their current options, Senad Lulić and Jordan Lukaku, don’t convince them.

Lulić is 34-years-old and needs replacing while Lukaku, who they considered as his heir, hasn’t been able to convince or find regular playing time because of injuries.

Lazio want to find players who have experience in the Champions League, and thus Rose fits the bill perfectly, have played in Europe with Tottenham for the last four years. 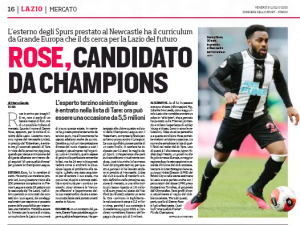 He’s not wanted at Spurs, hence why José Mourinho sent him to Newcastle in the January transfer window.

That loan deal has been extended until the end of the season, but it’s unclear if Newcastle will look to make it a permanent switch, particularly as their potential takeover still remains unclear.

Corriere explain that ‘in England’ they claim that Rose will cost around €5.5m as his contract expires next summer, meanwhile his contract is around €3m per year.

As yet, Lazio haven’t made their move but they ‘follow the situation’ as there is a belief he may be the ‘right candidate’ for them.