Even if you’ve just been remotely paying attention to what’s going on in the world of Wolverhampton Wanderers these past few days, you’ll be aware of the fact Leander Dendoncker is a wanted man.

We’ll blame the Italian media for that, since they are the ones pushing the idea that Lazio really want the Belgian in their squad next season.

At first, Gazzetta dello Sport and Corriere dello Sport were taking turns publishing stories about the Wolves versatile player, but now they’ve teamed up and done one each on the same day.

We’ll start with Gazzetta, who start off by reiterating that Lazio have ‘set their sights’ on the 25-year-old, and is one of the footballers they are looking at to bolster their midfield.

If he were to be signed, he would quickly have a ‘role of first importance’ in Simone Inzaghi’s side, such is the level they feel he is playing at under Nuno Espírito Santo these days.

Just like we thought when we first saw the mentions of €25-30m as Wolves’ asking price, Gazzetta feel that’s a bit low, and they state it’s ‘probable’ the Premier League side would actually ask for more, going as far as reaching €40m. 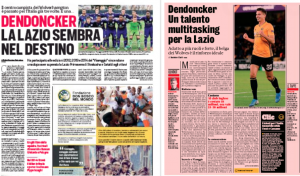 Over at Corriere, there isn’t much that’s new, as the €25-30m valuation is once again mentioned, and they have no idea whether or not talks will potentially take place between the two sides.

What they do feel, however, is that Lazio ‘seem to be in his destiny’, since he already played against them back in 2013 at youth level, facing players who are still there to this day, like Thomas Strakosha.

We feel that’s pushing it a little, but you can’t fault their optimism.

Either way, we’d suggesting focussing mostly on what Gazzetta have to say, as it seems unlikely Wolverhampton will want to part ways with Dendoncker anytime soon, and even if they did, they wouldn’t do so for €25-30m.