Trabzonspor have reopened negotiations with Aston Villa over forward Trezeguet after convincing the player to join the club.

That’s according to Sabah, who say there is a growing confidence from the Turkish side that they will get their man.

The newspaper reports that Trezeguet ‘has been persuaded’ to sign a €1.5m plus €700,000 in bonus contract with the Super Lig side after talks with him manager Christian Emile throughout this week.

The Aston Villa man reportedly asked for more time to consider the offer, but has now ‘given a positive’ reply to Trabzonspor’s management, so the move can go ahead in the coming days.

Following this development, they now ‘re-contacted’ Aston Villa to discuss a transfer fee. 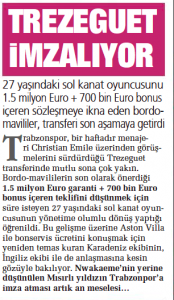 There is no mention of what this fee may be, but that they are ‘certain’ they can find an agreement with Steven Gerrard’s time. Previous reports suggested it could be around €3.5m.

Indeed, Sabah go as far as to say that it is ‘only a matter of time’ before the Egyptian star signs for Trabzonspor, who consider him a replacement for Anthony Nwakaeme.