After a few days of excitement regarding an alleged Napoli interest in West Ham’s Arthur Masuaku, everything went a bit cold when the Serie A side started heavily focusing on Atlético Madrid’s Sime Vrsaljko.

As things stand, Napoli are currently only prepared to pay €14m for the Croatia international, while Atlético Madrid want nothing to do with anything below an €18m bid, meaning the negotiations are at something of a standstill.

The former Sassuolo defender was always number one on the list, with the Hammers’ left-back only an alternative, but with no agreement yet to be found, the idea of moving for the West Ham man has reemerged.

Second on the list is Benfica’s Alex Grimaldo, who would cost around €40m, which is considerably higher than what Napoli are willing to shell out for a backup left-back. 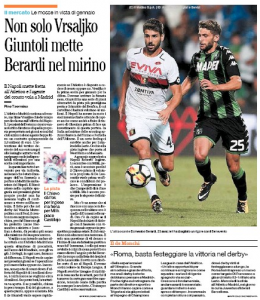 The only way such an amount would be spent would be if the Vrsaljko deal fall through and Faouzi Ghoulam, whose contract ends at the end of the season, refused to renew in Naples.

That means that, in order for the Serie A side to start focusing on the West Ham defender, talks for the Croatian would have to stop and their current left-back would have to extend his current deal.

It’s not an impossible scenario, and thats why Il Mattino state Napoli have ‘put their intermediaries in gear’ for the alternatives, just in case.

We’ll let you know how things develop in Italy over the coming week or so, but Masuaku’s time at London Stadium could come to an abrupt end in January if Napoli start focusing on him.