According to Turkish newspaper Sozcu, Besiktas officials remain keen on Fabri’s return but they don’t want to sign his Fulham teammate Ryan Babel.

Sozcu say Besiktas are ready to make a loan offer for Fabri and they are eager to be reunited with the Spanish goalkeeper, who they sold to Fulham for €6m last summer.

However, according to Turkish newspaper, the Besiktas board are not keen on Babel’s return because of the previous antics of the Dutch player prior to his departure from the Vodafone Arena.

Babel is said to be a target for all three Turkish giants, B 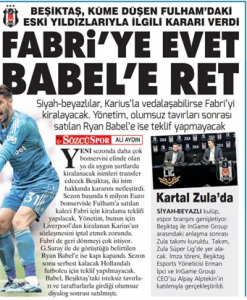 esiktas, Fenerbahce and Galatasaray, but Sozcu report the Black Eagles have distanced themselves from the winger.

The Netherlands intentional will become a free agent in the summer.