As well as struggling on the pitch in recent weeks, Arsenal have been having a few important issues off it.

Forget about the pressure Unai Emery is under, the big talking point has been that of Granit Xhaka, who has been pushed to one side and stripped of his captaincy after sarcastically clapping the Emirates crowd while they booed him off the pitch.

This has led to a few transfer rumours, which weren’t helped when the Spanish manager explained he wasn’t sure if the Switzerland international would ever play for Arsenal again.

Stories in his home countries have suggested he is already looking for a house in Milan, which the Italian media have picked up on.

However, they haven’t run with them excitedly as one might expect them to, but instead are rather cautious of getting drawn in. 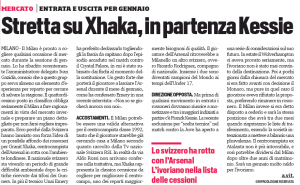 Corriere dello Sport are among those commenting on it, explaining that while a move for the former Arsenal captain could ‘represent a classic opportunity to improve the midfield’ for Milan in January, who could be a ‘valid alternative’ for the 27-year-old.

That being said, they make it clear that despite the claims of him looking for a house in Milan, there has been ‘no confirmation of any negotiations’.

This backs Calciomercato’s earlier claims that Arsenal have received no formal offer from the Serie A side so far, with the Italians merely keeping an eye on his situation.