Home Europe Club having problems to afford Southampton target, maybe this is a chance
SHARE

On Wednesday, we covered a report from Portugal which detailed the race between Southampton and Sporting for the Barcelona forward Paco Alcácer.

It was claimed that even though the Saints would prefer a permanent deal, Sporting would be trying for a loan spell with an option to buy. And as Barcelona think the player can still improve a lot, they would be fine with that second idea.

Now today, newspaper Jornal de Notícias brings some good and bad news for Southampton fans who are hopeful of the signing.

The good news is: Sporting are having problems affording his salary. Alcácer makes €5m gross per season at Barcelona, and The Lions need the Catalan side to pay ‘at least’ half of that. 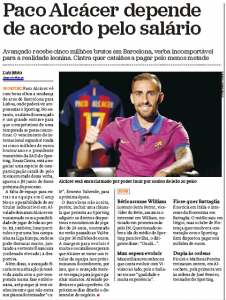 But even though that would help Southampton in the race, the problem is Barcelona are really not keen on letting the player leave permanently.

Proof of that is that they don’t even want to include a buying option in Sporting’s loan offer. They really believe Alcácer can return to the club and succeed one day.

This isn’t a view often shared by the Catalan media.