Manchester City completed the signing of Pedro Porro from Girona last summer and then immediately loaned him out to Real Valladolid.

The right-back has made 11 appearances in the league, which includes only six starts and he hasn’t featured for the La Liga side since mid December.

In addition to this, the City owned player is also keen not to continue at Valladolid for the second half of the season and is looking forward to cutting short his temporary spell with them.

According to the report, Girona haven’t lost track of the Spaniard and have probed the possibility of signing Poro in the winter market. 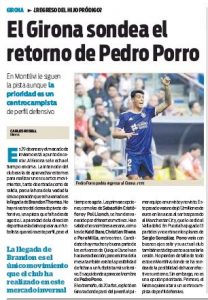 Unfortunately for the defender, his signing isn’t considered as a priority for Segunda División side as they have set their sights on bringing in a new defensive midfielder before the window closes.

If Poro wants to terminate his loan stay with Valladolid, he and Manchester City must find a new club in the final days of the window.