It’s now been a year since Manchester City fullback Pedro Porro joined Sporting on a loan for two seasons, and to remember the date, newspaper Record features a story about the player’s situation in Lisbon.

It’s no secret that Sporting are interested in making his move permanent, and even though they can trigger the buying clause until the summer of 2022, it continues to be likely that the transfer will be sorted sooner.

Record writes the player has ‘everything agreed’ to sign with Sporting a contract until 2025. Now club president Frederico Varandas is said to be sorting the terms for the purchase with Manchester City.

This is said to be a ‘new deal’, with the Lions only starting to pay for the transfer after the next summer. The move would also cost less than the €8.5m clause which was previously agreed. 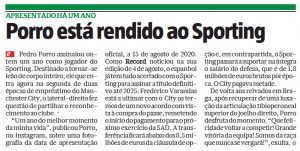 However, even though Manchester City currently pay 50% of the player’s wages, the salary will be totally taken on by Sporting as soon as the move is confirmed.

Porro already has 38 appearances for Sporting and quickly became an important player at the club.

He should leave Pep Guardiola’s side without a single chance to play for the first team.