This is one more transfer window where we heard a lot about the money made by agents when intermediating deals from Portuguese clubs.

Not long ago, we covered the local media claiming the representatives were having ‘scandalous commissions’ with summer deals.

The main one was Fabio Silva’s move from Porto to Wolverhampton Wanderers, for which the Premier League side paid €40m, and agents kept 25% of it.

The Dragons’ president Pinto da Costa was interviewed by TVI last night, and explained several financial issues that the club have been through during the Coronavirus crisis.

When speaking of Fabio Silva’s move, he claimed this was a great deal for Porto, saying the same agent who got a big commission is the one who previously led his renewal and raised his price. 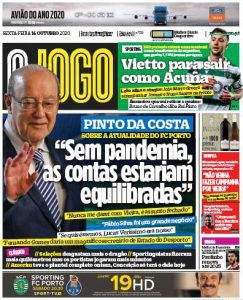 good agent is important for football”, said Pinto da Costa (via O Jogo). “It was a great deal for the agent and for FC Porto”.

Fabio Silva already made three appearances for Wolves, and is still seeking his first goal for the club.