Leeds United were linked with a handful of midfielders in the summer transfer window.

Bayern Munich’s Michaël Cuisance came close to joining the Whites, but the deal collapsed and the midfielder ended up joining Marseille on loan.

Levante’s José Campaña was identified as a target and today’s edition of Mundo Deportivo explains he had ‘sparked interest’ from the Premier League side and Atlético Madrid.

The 27-year-old has a contract with the La Liga side until 2023 that has a €60m release clause. The newspaper also details why Leeds failed in their attempts to bring the midfielder to Elland Road.

It’s claimed Marcelo Bielsa’s side tabled an offer of €15m plus variables for signing the newly capped Spain international. 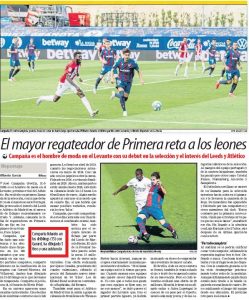 However, their bid was ‘rejected’ by Levante president Quico Catalán, who had slapped a €30m asking price on Campaña.

The fee requested by the La Liga side’s chief was two times what the English side had offered for his signing.

Leeds United decided against improving their bid for Campaña and ended up taking Raphinha from Rennes on deadline day.