Although most of the Dutch and the Mexican media are pretty confident that Edson Alvarez is heading to Ajax, there’s still a possibility that he could sign for Wolverhampton Wanderers.

Mexican newspaper El Universal has a story today bringing quotes from the America president saying the race for the defender is still open.

The outlet acknowledges that, in the Netherlands, people are quite confident that the Amsterdam side are close to signing the player, but they would rather believe their sources in Mexico.

“(Ajax) Are the most approached in a more formal way, they have asked the conditions and have been in communication, but there is nothing concrete yet,” Santiago Baños told El Universal. 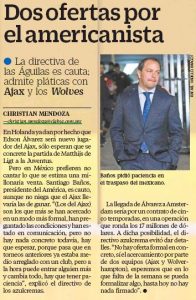 “We must wait, because it happens that in previous tournaments a deal was already half agreed with a club, but when someone else can enter and change everything, you have to have patience.”

El Universal takes the recent reports saying that Ajax’s offer would be US$17m, but the America president didn’t want to give any details.

“There is no formal offer specifically, yes, there’s the approach from two teams (given as Ajax and Wolverhampton), hopefully in the remainder of the week they can formalise something, until today there is nothing signed.”

Meanwhile, Wolves fans probably remember that front page from Record saying the club were close to finding a deal for Alvarez. Since then, the newspaper hasn’t even mentioned the Molineux side, and today, they do something similar about the interest from Ajax.

Chelsea ‘particularly serious’ about signing midfielder – Have second option as...