Despite all its controversies, Rui Patrício’s transfer from Sporting to Wolverhampton Wanderers was pretty simple when it happened… it’s just what’s happened since then which has created drama.

When the clubs failed to agree a fee for the goalkeeper, he rescinded his contract with the Lions and signed for the Premier League side as a free agent, making things pretty simple.

But as the Lisbon side now fight to get some money for the transfer, we read about new talks every week. And newspaper A Bola brings one more of these stories today.

According to the outlet, the Sporting president Frederico Varandas is travelling to England on Monday so he can negotiate a fee with Wolverhampton. 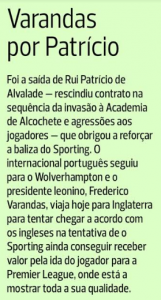 A Bola writes that Varandas is ‘trying to get’ some money for the transfer, and even though there had been some confidence about an ‘imminent deal’ in the past few months, A Bola doesn’t make it so clear now.

Last week it was reported Varandas was flying on then for the talks and had been in England, but it seems he needs to return a second time.