In a mix of suggestions and reports this weekend, the player has been linked to Everton, Leeds United and even Chelsea. All excited with his display, apart from Watford supporters, who couldn’t really understand how the player flopped during his loan spell at the club this season.

The Portuguese press has reacted about it today, and it turns out that Carrillo’s potential is a mystery even to Benfica president Luis Filipe Vieira.

According to newspaper Correio da Manhã, Vieira can’t really understand how the player can do so well for the national team and still disappoint both at Benfica and at Watford. 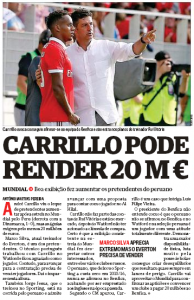 The president now expects Carrillo to impress at the World Cup so he can leave the Lisbon side on a permanent deal, with the Eagles looking to make €20m from his sale.

Now both Correio da Manhã and O Jogo are linking the Peruvian international to Everton. The player would be a request from the new club manager Marco Silva, who has previously worked with him at Sporting and Watford.

O Jogo still claims that there are ‘other English sides’ interested in the players, but couldn’t name who the pretenders were. Jorge Jesus’ new side Al Hilal is also said to be in the race.