As you will all know by now, Luis Suárez is of interest to Lazio.

There’s been enough stories for you to have seen it even if you don’t read transfer rumours news every day, and it’s not going away anytime soon.

The reason for this is the player’s agent, who is the same as Luis Alberto’s, allowing Lazio an easy in for the Watford striker, currently on loan at Real Zaragoza.

Set to finish the season with the La Liga2 side, the Colombian could also be living his last few months as an official Hornet, but it will all depend on the Premier League side’s willingness to sell.

The player’s agent, Miguel Alfaro, has been in Italy ‘for days’, according to Corriere dello Sport, and with Alberto’s contract renewal announcement around the corner, talks are bound to take place.

Lazio’s intentions with Watford are they are ‘ready to offer between €15-18m’, but ‘do not want to go over €20m’ for a player who is still developing and ‘hasn’t played in a first-tier league yet’. 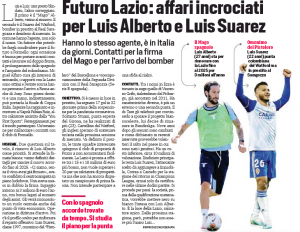 Nigel Pearson’s side, down their end, are hoping for some kind of ‘auction’ this summer, although they would need more than one interested party for that.

As things stand, there has been little mention of competition in the Italian press, even if some members of the Spanish media have suggested teams like Valencia or Getafe could come knocking.

Still, with Alfaro in Italy, expect more of these stories in the coming days, and if anything changes or happens, we’ll try to be the first to let you know.