Despite playing him in the odd friendly this pre-season, it’s clear Thomas Tuchel doesn’t fully believe in Tiemoué Bakayoko at Chelsea.

The Frenchman looks set to leave Stamford Bridge this summer, and Milan in Italy are reportedly keen to sign him.

That hasn’t changed, as explained by Corriere dello Sport, who state ‘a duel for the midfielder can light up’ between Stefano Pioli’s side and Napoli.

However, Milan have a ‘preferential lane’, because Bakayoko is himself ‘very pleased’ with that particular destination. 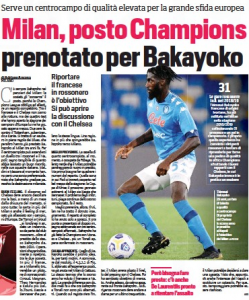 While the talks between Chelsea and the Serie A side ‘have yet to take off’, the basics ‘are all there’, including a ‘good feeling’ between the two clubs following the successful transfers of Olivier Giroud and Fikayo Tomori.

Bakayoko is seen as the ‘ideal profile’ for the Italians, but they have other priorities first, needing an attacking midfielder first.

Once that’s done, however, they could return for the Chelsea man, although beware of Napoli as ‘stalling could be risky’.