Home Europe Club would prefer Liverpool player on a loan with a view to...
SHARE

Nowhere near Jürgen Klopp’s squad for the Premier League season opener against Norwich, a move away from Liverpool looks more and more like could be the best thing for Dejan Lovren’s career.

Wanted by AS Roma, who seem ready to give up on Toby Alderweireld, the Croatia international firmly remains in Gianluca Petrachi’s plans, and Corriere dello Sport believe a meeting is planned for today between the Serie A side and Lovren’s representatives.

The interest originally came, according to the Italian newspaper, because Liverpool themselves offered their centre-back to Roma a few weeks ago.

While the Reds were originally asking for €20m for the 30-year-old, that plan could change, as there is now talk of a loan with a view to buy being Roma’s preferred option. 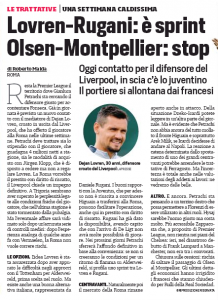 Liverpool, on the other hand, would rather see Lovren go permanently.

On a more positive note, Roma seem to be happy with the Croatian’s health situation, ready to take a risk on his knee, even if, should a transfer take place, further medical tests will be undertaken to guarantee everything is indeed in order.

Since Liverpool don’t seem too bothered about losing Lovren and Italian clubs have until September 2nd to buy players, there is no rush here, meaning this might drag on for a while longer.