Home Europe Club prefer to get Liverpool player on loan with view to buy...
SHARE

The Dejan Lovren to AS Roma saga continues on its merry way on Wednesday following Tuesday’s English media reports Liverpool were willing to do a deal at around £15m.

That was a bit different from the Italian claims, who stated the Champions League winners had reduced their price to €20m, but if the English media are correct, then that suits the Serie A club to a T.

Preferring to do a deal at around €15-16m, the Italians would like to save even more money this season if they can, which is where the idea of a paid loan with a view to buy comes in.

Gazzetta dello Sport have the details, explaining Roma are prepared to pay €3m up front to then pay €12m in 2020 for the player’s permanency. 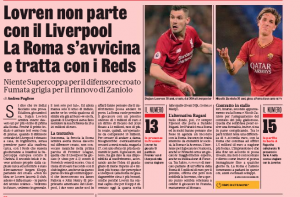 That would total around €15m, which still falls a little bit short of the £15m valuation (even though the pound has dropped considerably of late), and the newspaper feel a deal reaching €17m would be a nice middle ground for all parties.

Lovren has also agreed to lower his wages by around €1m/year (going from four to three) to secure himself more first-team football than he is getting at Anfield.

He was left out of the cup travelling to Turkey to face Chelsea in the UEFA Super Cup, further emphasising his position in Jürgen Klopp’s pecking order.

It’s all certainly heading in the right direction, and unless Liverpool really dig their heels and both clubs are as stubborn as each other, this should get over the line before September 2nd.