Kurt Zouma leaving Chelsea during the summer transfer window now looks increasingly likely. Several clubs are trying to loan the French defender, and stories from Spain, Turkey, and France all say there’s a willingness from Chelsea to let Zouma go out for a season and get back to his best level following knee surgery.

Friday’s edition of L’Equipe links the player with a switch to Marseille. It’s explained that Zouma would fit in well with Marseille’s ‘champions project’, despite the club looking to buy players rather than loan them.

Loaning Zouma would allow Marseille to spend transfer funds elsewhere and he’d still be a high profile signing, especially as he’s made a return to Didier Deschamps France squad.

With Zouma having a contract until June 2019, Chelsea may want an extension before letting the 22 year old leave, and L’Equipe point out it’s been made very clear there’ll be no buying 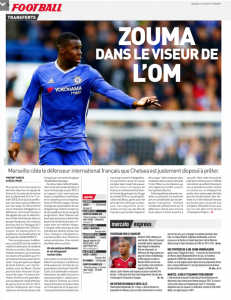 option in a loan.

Whilst a Zouma exit once seemed a surprise, it now looks increasingly likely, and Marseille has ‘positioned itself’ towards the front of the queue.

The French club believe they can tempt Zouma, especially with a World Cup on the horizon.