Real Madrid are open to selling Martin Odegaard this summer should Arsenal try to bring him back to the club.

That’s according to MARCA, who say that Real Madrid have put a price on all their players as part of a club strategy to raise funds.

Reports over the last week have indicated that Odegaard wants to leave Madrid permanently this summer after returning from his loan spell at Arsenal.

He had initially wanted to fight for his place and prove himself, but a recent display in a friendly against Rangers is said to have left Carlo Ancelotti unimpressed and keen to get rid as well.

That could have opened the door for Arsenal to get their man back after his short stint in the second half of last season, and MARCA pick up on that today.

They say the door is very much open as a result of the current policy at Real Madrid, that all but a few players in the squad are available.

They state that ‘most of the players’ in the current squad have a price tag, and among them is Odegaard, who hardly had a chance under Zinedine Zidane and still doesn’t see a clear future at the Bernabeu. 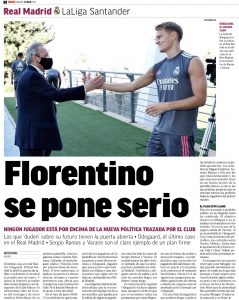 It’s claimed that if a club ‘come up with the money’ then it’s a case of ‘see you later’. In other words, make a good enough offer, and Madrid will sell.

At the minute, there is no proposal for the Norwegian; indeed, all offers arriving at the club are loan bids, but that could certainly change in the coming weeks.

MARCA say ‘there is room’ for the likes of Arsenal to make a bid if they want Odegaard back; it’s now up to the Gunners to do just that.