Portuguese outlet Correio da Manhã today features an interesting piece on the amount paid by Manchester United for the signing of Bruno Fernandes so far.

The local media had already reported this week that the Red Devils have spent another €3m due to some performance bonuses.

Correio da Manhã now comes up with a few more details, and a headline saying that from that amount, €770k went straight to agents and other expenses.

The newspaper claims that Sporting hadn’t made that clear in their financial report, as there was an expense of €770k with no clear destination, but their journalists found it out. 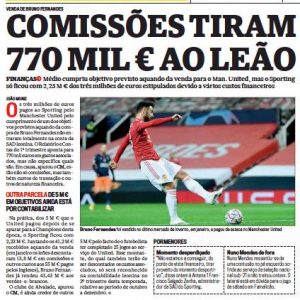 Due to commissions, Sporting had first received €41.2m from the €55m paid by Manchester United for the move. That means they’ve now made €43.4m with the sale of Fernandes so far.

Correio da Manhã adds that Sporting are receiving other €5m due to Bruno Fernandes’ first 25 appearances for Manchester United. That amount will only be mentioned in the Lions’ financial report from the second quarter of the season.