Real Madrid have lost three of their last four matches played in all competitions and have failed to score in any of these fixtures.

After the Champions League winners’ poor run, there were concerns about Julen Lopetegui’s future at the club, but their manager’s immediate future is not in danger according to AS.

The Spanish capital side have turned their attention towards signing Chelsea star Eden Hazard in the future, whose contract at Stamford Bridge runs down in 2020.

He has had a good start to the season with the Blues, scoring eight goals and registering three assists in all competitions. 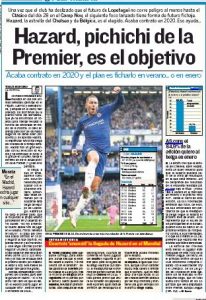 Earlier this week, the west London club star admitted that it is his dream to play for Real Madrid and AS has viewed it as the player already taking the ‘first step’ to achieve his dream of playing for the La Liga giants.

The 13-time European champions lost Cristiano Ronaldo to Juventus in the summer and Hazard is identified as a player to fill in the ex-Manchester United man’s shoes at Santiago Bernabeu.

The Belgium international has no intentions of renewing his contract and Real president Florentino Pérez and director general Jose Angel Sanchez are already working on signing him, either in January or at the end of the season.

If it’s in the mid-season transfer window, the European champions are ready to pay between €100-€120m, but will not pay more than €80m next summer. AS.com carried a survey and 84.9% of fans have voted Real Madrid to sign Hazard in January.

It is unlikely that Chelsea would sanction the sale of their key player in January, meaning Real may have to wait until mid 2019 to secure the 27-year-old’s signature.