Juventus could offer to pay part of Aaron Ramsey’s wages to get him out of the club, with Everton known to be one of the interested parties.

That’s according to Gazzetta Dello Sport, who cover how the Italian giants could look to sell in the January transfer window.

The newspaper explains that Juventus do not have a big budget for the January window but want to improve their squad if they can, as they chase down a top-four spot.

Their ability to move, though, depends on what players they can get out of the club, and Ramsey is at the top of the list.

Club chief Federico Cherubini has already spoken to Ramsey’s agent to ‘plan a departure’, something we covered yesterday amid reports about Everton.

That made clear that there was no agreement in place at this moment in time, and while his agents had presented offers from the likes of Everton, there were still issues.

This was chiefly focused on Ramsey’s wages, which at €7m a year, he doesn’t want to give up, and there are no clubs willing to pay. 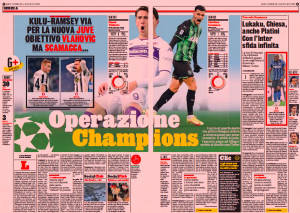 He won’t leave Juventus and that wage packet unless they pay him to do so, something the Italian side aren’t all that keen on.

It is that issue which has caused the divide between Ramsey and the Serie A giants.

Today, though, Gazetta suggest that Juventus could pay ‘part of the salary’ to help get Ramsey out of the club.

That could work for the likes of Everton, who are limited by Financial Fair Play and unlikely to be able to offer anything near what Ramsey is currently earning.

Either way, the Welshman is among the ‘most likely’ to leave Juve in January, with a ‘diplomatic rupture’ between him and the club pushing him closer to the exit door.