Still stuck, the deal taking Arsenal’s Granit Xhaka to AS Roma could very well see some progress in the near future.

That’s the line being pushed by the Italian media this week, and there’s a reason for that.

Firstly, Tiago Pinto is just finishing off the transfer of Matias Viña for the left-back position, meaning he’s been busy elsewhere for the time being, following by the second point, which is that Xhaka has been promised to Mourinho and the club will make sure it happens.

The game of chicken they have been played with Arsenal hasn’t really worked out, and so Corriere dello Sport, reminding everyone the Gunners are asking €20m for their player, claim the Friedkins, the Serie A side’s owners, could get involved. 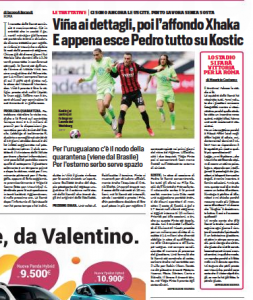 They explain that while Roma are ‘intensifying contacts’, the top men ‘could decide to do take that extra step’ to ‘gift the midfielder in the first few days’ of their trip to the Algarve.

To us, that sounds like they’re willing to dig a bit deeper in their pockets to sign the Arsenal man, which will be music to Edu Gaspar’s ears.