The Brazilian struggled to play in Portugal as well, which led to him returning to the London Stadium when the deal came to an end, leaving the Hammers with a big question of what to do with him.

Fortunately for the Premier League side, Lazio came along, as Maurizio Sarri, their new manager, was looking for a player of Anderson’s ilk, and so a deal was struck.

That being said, Corriere dello Sport make it clear it wasn’t just the former Chelsea boss who wanted the West Ham man back in Rome, as their owner, Claudio Lotitio, is ‘actually very close’ to the player.

They explain that ‘he has always considered him his protégé, and when the opportunity arose to take him back from West Ham last summer, he didn’t think twice’. 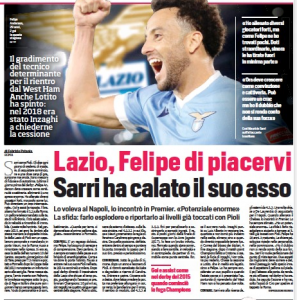 Since then, Felipe Anderson has repaid that faith nicely, starring in the recent derby against José Mourinho’s AS Roma, during which he scored and assisted another in their 3-2 win.

As for Sarri in all of this, he had been a long time fan of the Brazilian, asking Aurelio De Laurentiis to buy him in the past during his stint at Napoli.

In the end, everything worked out for everyone, with West Ham hoping for a sale down the line, as they hold a percentage of a future sale.