As you know, Jorginho, before joining Maurizio Sarri at Chelsea, was all set to head to Manchester City to team up with Pep Guardiola.

However, the Blues swooped in at the last minute, and the Premier League champions were left without their midfield reinforcement.

There was some bad blood between Manchester City and Napoli after that, which showed during their attempts to sign Kalidou Koulibaly last year, as Aurelio De Laurentiis decided to put his foot down regarding the price the Cityzens never desired to meet.

That didn’t help things either, and we now find ourselves with a situation where the Napoli owner ‘has decided not to negotiate with City anymore’.

This is according to Corriere dello Sport, who reveal this as part of an article explaining how Guardiola likes Fabián Ruiz, who could leave this summer in exchange of €60m. 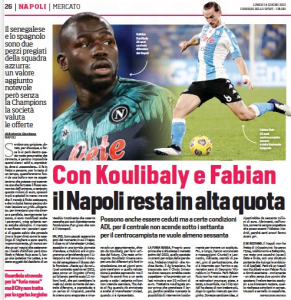 However, ‘after the rudeness received for Jorginho’, De Laurentiis has made an executive decision and would seemingly rather let his man go to Atlético Madrid instead.

He could always change his mind, which would then mean Manchester City will need to shell out €60m, but for the time being, there’s a big anti-City wall around Ruiz.