It doesn’t matter if you call reports ‘the usual fake news’, newspapers will continue to push their story if they believe in it, and that’s exactly what the Italian press are doing with James Pallotta’s interest in investing in a Premier League club.

Over the past week or so, we’ve seen the Roma owner linked with takeovers at both Newcastle United and Leeds United, although he made it clear he wasn’t all that interested in the former of the two on Tuesday.

Despite this, La Repubblica continue to name Mike Ashley’s club as a potential target, and, as well as Leeds United, they add Aston Villa to the mix.

There has been little to no indication the NSWE Group would be willing to sell the club anytime soon, having only bought it less than two years ago, especially after helping them get promoted back to the Premier League last season and some heavy investment in the summer. 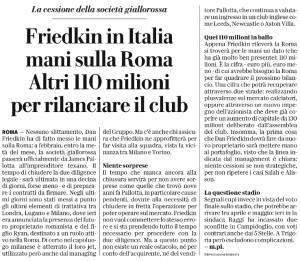 La Repubblica don’t have a lot of detail, simply stating that Pallotta, who is on the verge of selling Roma to American billionaire Dan Friedkin, ‘continues to consider an entry in an English club like Leeds, Newcastle and Aston Villa’.

We know both the Magpies and Andrea Radrizzani’s club are open for business, but we’ll have to wait and see about the Villains.