Crystal Palace showed interest in signing Borja Mayoral towards the end of the summer window, but a potential transfer was blocked by AS Roma manager José Mourinho.

The 24-year-old joined the Serie A side on a two-year loan deal from Real Madrid in 2020. The arrival of Mourinho has not helped the striker as he has managed only 91 minutes from four league matches this season.

It’s no surprise the Spaniard is looking for a move away from Roma in the winter market, and the Eagles are still in the picture to sign him.

Fiorentina have also identified Mayoral as a target. Last month, reports from Italy warned La Viola to watch out for Patrick Vieira’s side, who are still ‘very interested’ in the attacker. 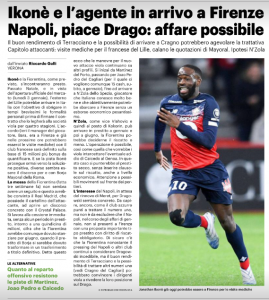 La Nazione, a newspaper local to Fiorentina, have a positive report on Jonathan Ikoné’s impending arrival from Lille.

With regards to the Real Madrid owned player, the situation ‘seems to be different’.

The Serie A side’s approach doesn’t seem to have convinced the Spanish giants, which is why they ‘open a concrete conversation’ with Crystal Palace. It’s claimed ‘work is underway’ for an ‘immediate sale’ for a fee of about €15m.