There have been so many reports about Manchester United and Victor Lindelof in Portugal that it’s now hard to remember which newspaper has said what regarding the chase.

But the local media was a little quieter this morning. O Jogo, Record, Correio da Manhã, Jornal de Notícias, Diário de Notícias… none of them had a single update on the rumour.

Except for A Bola, who are once again claiming the transfer is very close to being done. They say Benfica president Luis Filipe Vieira is set to fly to Manchester this week and officialise the deal. 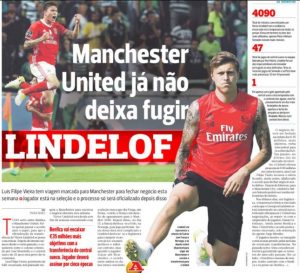 With a headline saying ‘Manchester United don’t let Lindelof escape’, it’s reported that the Red Devils and Benfica have already found an agreement of €35m plus €5m in bonuses, and Vieira’s trip will only be to put things to paper.

Victor Lindelof is currently with the Swedish national team, and A Bola claims it will be hard for him to travel to Manchester United before the friendlies with France and Norway. But when he’s free to go, the move will already be concluded.

It wouldn’t be a surprise if A Bola are correct, and Luis Filipe Vieira is flying in to, as far as he’s concerned, seal the deal with Manchester United. Whether the Premier League club agree may be another thing entirely.