The Spanish media are taking the prospect of Ferran Torres moving to Barcelona very seriously.

Despite there being an acceptance that the club’s finances remain in a very difficult situation, and that any signings in January will have to be structured to deal with that, there’s been widespread excitement about the Manchester City player potentially moving.

It somewhat mirrors the situation with Raheem Sterling a few weeks ago, when endless Catalan reports were filled with confidence, only to then drop away when it became abundantly clear Manchester City don’t exist as a club to simply help Barcelona out.

Rafael Yuste, the Blaugrana’s vie president, spoke to the media over the weekend and dropped some hints about the potential move.

AS quote him as saying: “Ferran is a great player and we are working with discretion. We have friends at Manchester City and there is good relationship. Ferran Reverter (the club’s CEO) has paid a courtesy call. I understand the questions but, out of respect for the players and the clubs, we cannot give expectations that could end up being positive or negative.” 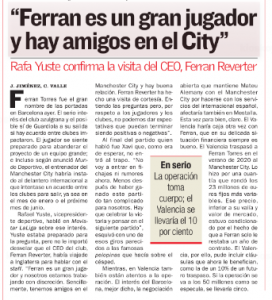 That would make it pretty clear that Barcelona are making genuine attempts to sign the Manchester Coty player, with it being repeatedly stated Ferran Torres himself is keen on the move and to take his career back to Spanish football.