Besiktas want to sign Cenk Tosun from Everton in January but are only willing to offer him a quarter of his current wage packet.

That’s according to Sabah, who say the club’s finances and long-term plan means they cannot get near what he is earning at Goodison Park.

Tosun is out of contract at Everton at the end of the season, and there is no interest from either party to extend their relationship.

He’s subsequently been linked with a move back to his homeland, where former club Besiktas are keen to sign him for a third time.

Talks with Everton were reportedly held during the recent international break, and it’s been claimed the Toffees are even willing to let him leave for free just to get his wages off the books.

It is those wages that are stopping a move back to Besiktas, though, according to Sabah. They say that they want to ‘solve the goal problem’ at the club with the signing of Tosun, but there’s a catch.

The Turkish side are only willing to offer a quarter of the £3.8m a year he’s currently earning in England. That’s around £80k a week, meaning they will offer him wages of £20k a week. 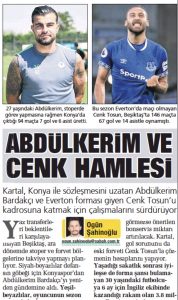 The reason the figure is that low is because of the club’s ‘long-term plan’ and payment limits that have been put on the club.

The offer is being ‘considered’ by the Everton striker, but it’s hard to imagine he would be willing to drop so significantly just to get away from Merseyside.

It’s a lot of money for a player to give up, particularly when he could just wait for six months and then return to his homeland on a free anyway.

There’s clearly work to be done on any deal, then, with it looking extremely likely he’ll stay at Everton in January at this point.