With the transfer window edging towards its end, Chelsea are looking around Europe for a landing spot for Tiemoué Bakayoko.

They thought they had one with Milan, but that all came crumbling down when Sandro Tonali was brought in from Empoli.

Now, it’s Napoli’s turn to offer the Frenchman some hope, where he would be able to team up once again with Gennaro Gattuso, who managed him during his loan spell at San Siro two seasons ago.

Two reports have emerged of official contact between the two sides, starting with Gazzetta dello Sport, who are reporting a phone call between Cristiano Giuntoli and Chelsea, where he offered €2m up front for a loan that didn’t include an obligation or an option to buy.

Furthermore, his offer included a €2m/year contract for the player, which is short of the €3.5m he currently earns at Stamford Bridge, meaning the Blues would have to make up the remaining €1.5m. 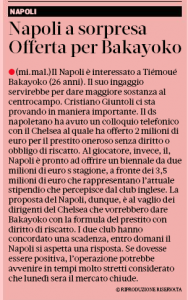 Chelsea, who ‘want an option to buy in the loan deal’, are said to have the bid ‘under examination’ and Napoli are waiting for an answer by tomorrow (Saturday).

This is all corroborated by Rai Sport journalist Ciro Venerato, relayed by TuttoNapoli.

He said: “Official offer from Napoli to Chelsea for Bakayoko. Phone call between the clubs: Napoli offer €2m for the paid loan with no right or obligation to buy. They’ve managed to offer the player €2m, but he earns €3.5m. Very difficult conditions. Chelsea wants a loan with a view to buy. By Saturday, the English club will let Napoli know what their answer is”.

Pretty much word for word what Gazzetta said, so he’s either read it and just repeated it or they have the exact same source.