At the weekend, a British tabloid dreamed up the idea of Julen Lopetegui moving to Elland Road, should Marcelo Bielsa decide to leave Leeds United.

It was reported the Spaniard is the ‘main candidate’ for Leeds, should their current manager decide to take another offer next summer.

These claims have obviously made their way to the Spanish sport media, but are largely brushed aside by Mundo Deportivo on Monday. They say Sevilla are ‘oblivious’ to the claims and concentrating on their important period ahead.

Facing Chelsea midweek in the Champions League, Sevilla want to win regardless of having already qualified for the next round, as they aim to win the group. Then at the weekend comes the task of facing Real Madrid.

Bielsa leaving Leeds United for another adventure is possible, but he just seems to fit so well with the Yorkshire club that other options may not be so attractive. 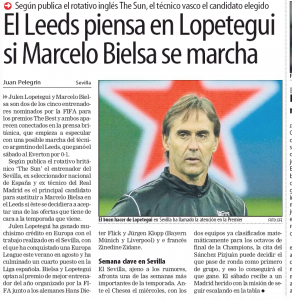 Even if that happened, convincing Lopetegui to leave Sevilla, given his likely regret over rash choices in the past, would be a very difficult task.