Sunday’s edition of L’Equipe reports there’s been an advance in Lille’s plans to sign Dodi Lukebakio from Watford.

The 21 year old has spent the season on loan at Fortuna Düsseldorf and has done well enough to attract interest from other clubs.

Fortuna would like to keep him but it’s not thought they can provide the funds needed for a deal.

Lille see Lukebakio as a possible successor to Nicolas Pepe, who is expected to leave the club this summer. They’re said to have approached the player’s entourage and submitted an offer on personal terms, it’s explained a ‘concrete approach’ has been made.

There’s no claim of contact with Watford, and Lille should probably make that step, if only to learn what the real transfer fee would be. 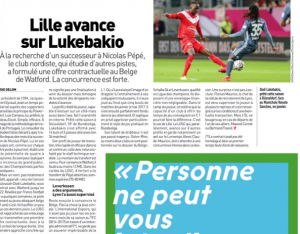 It’s again stated by L’Equipe that the Hornets would be looking for around €12m, which sounds low.

In Germany last week it was claimed Schalke have offered the player ten times what he currently earns, and they believe Watford want €20m.