Over the past few weeks, Moisés Caicedo has been heavily linked to Manchester United, with multiple claims that a move was on the verge of happening.

On December 29th, journalist Roberto Omar Machado reported ‘no agent, emissary or director’ from the Red Devils has contacted Independiente del Valle for the midfielder.

From the Premier League, Chelsea, West Ham United, Newcastle United and Brighton & Hove Albion, along with United, are named as suitors for the midfielder.

Sunday’s edition of El Diario had an interview with the 19-year-old, and also discussed the reports linking the player to English clubs.

According to the report, Caicedo’s name ‘sounds strong’ in the Premier League following the teenager’s ‘astronomic ascent’ in 2020.

Manchester United, along with a few other clubs in England, are mentioned, and the newspaper provides the South American side’s stance on the Ecuador international.

It’s claimed Independiente del Valle have ‘not yet agreed’ on the player’s transfer in the winter market. El Diario explain Caicedo’s employer have ‘put a price’ on him, and it’s now set at €10m.

The report states, ‘And in the midst of such talks and negotiations, the young man took advantage of the December holidays to visit his family in Santo Domingo’.

Caicedo made his first team debut in 2019 and featured for Ecuador’s senior team last year.

“The truth is I did not believe that everything was going to happen so quickly, but I entrust myself to God a lot and I work hard so that things turn out the way they are going,” he said.

“For example, I did not believe I would be at such an early age in the Ecuador national team, but as I said, everything is thanks to God and the opportunity that the ‘teachers’ give me to show myself.”

With links to Manchester United and other English clubs, Caicedo was also asked about the recent attention he has received from the media in Europe.

“It is very nice to be asked to interview… I did not think I’d grow up so fast. I make a lot of 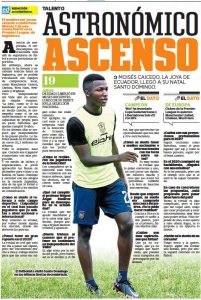 effort and I think journalists also notice that when interviewing me,” the South American explained.

On his plans for 2021, Caicedo said he wants to “continue growing as a footballer” and “to continue on the right track.”

Whether that track will coincide with United or any another Premier League club remains to be seen. If any suitors want to take the starlet away from Independiente del Valle, they will have to meet their new €10m asking price.