Home Championship Club not ready to give up on Aston Villa midfielder before transfer...
SHARE

With the transfer window shutting in Italy on Friday evening at 7pm UK time, clubs around the country are frantically trying to get some last minute deals done, including Empoli.

Over the past few weeks, the Serie A side have been trying to sign Aston Villa’s Birkir Bjarnason, and it doesn’t seem like they’re going to give up until the deadline has past, even if wages could be an issue.

We’ve already covered the situation a few times, and Gazzetta dello Sport on Tuesday claim the Italians are ready to launch another offensive to try and sign the Villain in an attempt to bring him back to Italy.

Prior to his move to Aston Villa, the Iceland international spent a couple of years in Serie A and Serie B with both Sampdoria and Delfino Pescara, scoring 10 goals in a season for the latter. 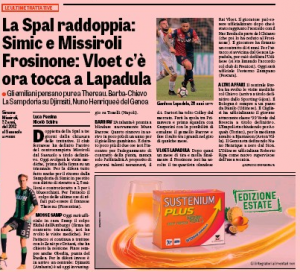 However, considering Steve Bruce appears set on using Bjarnason this campaign, starting him against Wigan, a game in which the midfielder scored the winning goal in the 94th minute, both player and club might need a lot of convincing.