Of all the teams reported to be after Ivan Perisic, Tottenham appear to be the keenest, as they are the most recurring in the transfer rumour mill in Italy.

On Tuesday, Calciomercato pointed out the Croatian is expecting to leave Inter at the end of the season, and his clubs are awaiting offers.

Both Arsenal and Tottenham have been interested from January onwards, and they are the ones Corriere dello Sport bring up on Wednesday, corroborating Calciomercato’s claims.

The hope from Inter here is to avoid the loan offers they received a few months ago, wanting ‘at least €30m’ to then focus on replacing Perisic. 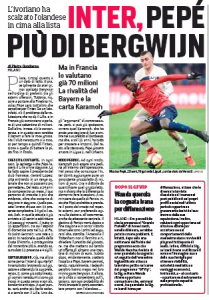 They will want that money straight away, so it will also be a hard no on loans with view to buy, seemingly regardless of the amount.

Considering both Arsenal and Tottenham should be better off this summer than they were in January once their prize money drops, that shouldn’t be an issue.

What could happen, however, is them trying to sign younger players first, and only turn their attention to Perisic if their plans A and B fail to materialise.