Not exactly a regular under David Moyes, the 24-year-old still started over half the games in the Premier League, scoring two goals and picking up five assists in 27 appearances.

That will be a satisfying start to what could be a promising career in England, but a lot could depend on who comes knocking for Fornals in the summer.

We say this because Corriere dello Sport look at the midfield situation at Napoli, who could lose Allan if Carlo Ancelotti gets his wish of reuniting with the Brazilian.

Should that happen, the Serie A side will want another midfielder, although not necessarily a defensive one, in their squad.

This is where Fornals comes in, as the Italian newspaper explain Napoli ‘have not forgotten’ the former Villarreal man. 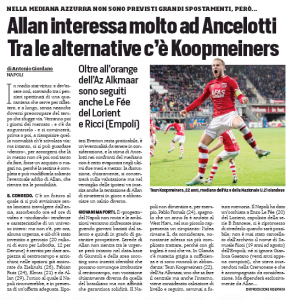 It’s stated the fact they lost out on Fornals ‘represents a regret’, but the ‘idea remains there’ and is one that could ‘be considered’, although they are aware ‘it is now more complicated’ since he’s in England and West Ham don’t necessarily need the money.

He’s one of a few names (the others being Teun Koopmeiners, Enzo Le Fée and Samuele Ricci) the club are looking at should Allan leave, but they will only make a move for one of them if the Brazilian is sold.

If he stays, Fornals is safe.

To be fair, he’s probably safe regardless, since we doubt the Hammers will want to sell a considerable investment so soon after his arrival, and if they do, they’ll want to make their money back (at least).