On Tuesday we covered claims from France that Leeds United are interested in Moussa Konate.

The Amiens attacker had been linked to West Ham and Burnley earlier in the season, when the asking price was put at €15m.

L’Equipe claimed Konate was in the viewfinder of both Leeds and Brentford, for a possible deadline swoop.

This was followed by The Daily Mirror reporting: ‘Leeds plan a £6million swoop for versatile ace Moussa Konate.’

Wednesday’s edition of L’Equipe states that Konate is ‘coveted’, but they point out Amiens ‘must retain’ the player for the coming season. 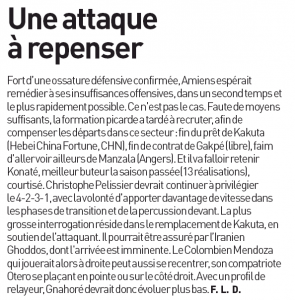 He was their top scorer last time around and a departure at this stage is thought to be a bad idea, given there’s not much time to get a replacement.

Add in that Leeds United’s are said to be planning a £6m swoop, and it makes things unlikelier.

That figure is half of what the asking price was earlier and there doesn’t seem a great reason why Amiens would drop so much.