On April 9th, we covered claims from Spain that Pep Guardiola ‘loves’ Rodrigo, but the midfielder remains ‘non-transferable’ for Atletico Madrid and Diego Simeone.

Three days ago, AS explained that Manchester City still ‘intend’ to sign the 22-year-old and their plan is to pay the €70m release clause to bring him to the Etihad in the summer.

Thursday’s edition of AS claim wages have wobbled the finances at Wanda Metropolitana, especially after new deals were handed to Antoine Griezmann and Jan Oblak in the past 10 months.

Los Rojiblancos’ current salary situation could force them to give up on renewing contracts of other important players because they cannot have a majority of the squad on hefty salaries like other Champions League clubs.

For this reason, there is a possibility that an important player could leave the Spanish capital club in the summer, and Rodri isn’t ruled out.

Atletico ‘fear the worst’ if Manchester City are determined to sign him this summer.

So far, the will of the player is to continue with the La Liga outfit because he believes the project at the club is one of the best in Europe. 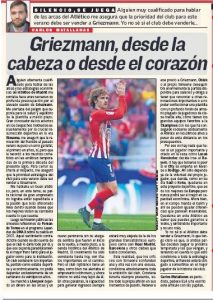 However, Simeone’s side will not be able to provide much better economic conditions, something he can achieve if he decides to make a switch to England, where the former Barcelona manager is keen on acquiring his services.