Raheem Sterling was, albeit weakly, linked with a move away from Manchester City in the summer transfer window.

It was thought by some that the England international could be looking for a change of scenery after repeat success with Pep Guardiola’s side, and around about now wouldn’t be a bad time to go.

Barcelona, one of the clubs linked, simply weren’t able to get together the funds to sign Sterling in the last window, but Mundo Deportivo insist things will be different by January.

The exits of Lionel Messi and Antoine Griezmann have helped, as well as further behind-the-scenes work on the club’s financial difficulties.

Mundo Deportivo report the Catalan club ‘has the money’ to get the Manchester City player in the winter market, and there’s 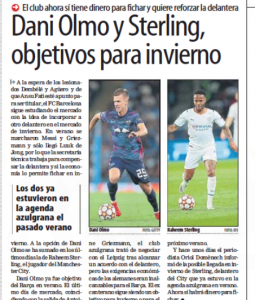 confidence a move would be possible.

Now it’s down to Guardiola and City to decide whether a sale is what thy desire.

A lot would surely depend on the player’s stance and how much was offered in terms of transfer fee.