Over the summer, the idea that Lazio, now managed by Maurizio Sarri, could make a move for Chelsea’s Kepa Arrizabalaga was a recurring one.

Neither Thomas Strakosha nor Pepe Reina have fully convinced between the sticks in Rome, and there is now a belief a new goalkeeper is needed at Stadio Olimpico.

Corriere dello Sport cover the situation on Thursday, explaining that Chelsea shot stopper is a man both the manager and Igli Tare, Lazio’s director of football, like.

It’s recalled talks regarding a loan already took place last summer, but the 27-year-old ended up staying at Stamford Bridge, where he is currently battling Edouard Mendy for the top spot under Thomas Tuchel. 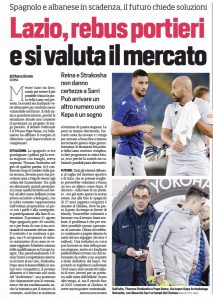 Described as a ‘dream’ for Lazio, Kepa, who would ‘willingly return to work’ with Sarri, is a difficult target to obtain, as Corriere reveal that regardless of the deal that ends up being struck, Chelsea ‘would need to continue to pay at least half of his wages’.

While this may not happen in January, this is certainly something that could be looked at for next year, even if the Blues ‘would prefer to find a club interested in buying the Basque player immediately and definitively’.

One to keep an eye on, certainly.