Despite his involvement in Manchester United’s winning goal against West Ham at the weekend, Anthony Martial is still on his way out from Old Trafford

The forward has made it clear he wants to end the season somewhere else, with a misunderstanding also taking place between himself and Ralf Rangnick last week.

That appears to be solved now, since he made his way back into the team, but that hasn’t stopped the fact clubs are interested, including Juventus.

Gazzetta dello Sport report on Monday that the Serie A side are ‘evaluating alternatives’ to Dusan Vlahovic should they fail in their quest to sign the Serbian, and ‘at the top of the list is Anthony Martial’. 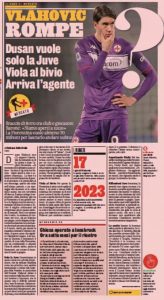 The idea here would be for him to ‘come from United on loan for six months’, but they would face competition from Sevilla.

Francesco Cherubini, the Italian club’s director of football, is said to be ‘in contact with the player’s agent’, but there remains an obstacle: the cost.

It’s made clear that any incoming that isn’t Vlahovic ‘must be low cost’, because the bulk of the money currently in the coffers is reserved for the Fiorentina star.

Can a deal be arranged? We’ll have to wait and find out.