Fotomac claim Besiktas are making progress in their transfer talks with Claudio Bravo as the Chilean goalkeeper edges closer to a move to Turkey.

Bravo’s contract at Manchester City will expire at the end of the season, and reports in the Turkish press say he’s a target for the Black Eagles. Arsenal are also said to be interested in his services, according to various reports.

It’s reported the Besiktas board have held initial talks with Bravo’s representatives and the 37 year old wants €1.5m per season on a 1+1 year deal, meaning he’ll get a one season contract with the option for another. Bravo is also said to be looking to bring his own goalkeeping coach with him. 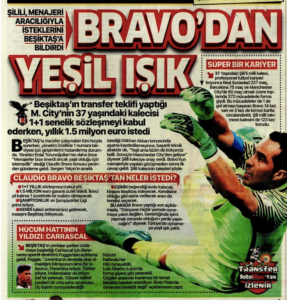 Sergen Yalcin is keen to strengthen his squad with Bravo, even though he previously had some reservations about the Manchester City player.

It’s reported Yalcin decided to move for Bravo after Besiktas failed to secure his primary targets.

The former Barcelona and Real Sociedad goalkeeper has made 16 appearances for Manchester City in all competitions this season, keeping four clean sheets.

Arsenal hopes of keeping player diminishing – Club consider him a...