Home Premier League Brighton Work permit situation could be key in player being at Brighton next...
SHARE

Brighton & Hove Albion took Percy Tau from South Africa’s Mamelodi Sundowns in the summer of 2018 and then loaned him out to Belgian side Union SG in the same window.

Having failed to obtain a work permit, the Seagulls had to send him out elsewhere on a temporary deal.

The situation didn’t change last summer and therefore, Graham Potter’s side allowed the midfielder to join Club Brugge on a season-long loan deal.

He managed four goals and eight assists in 30 appearances in all competitions for the Belgian champions this season.

The Jupiler Pro League side will soon start training for next season. According to Het Nieuwsblad, the Brighton owned player will not be part of these sessions and theoretically, he should return to The Amex. 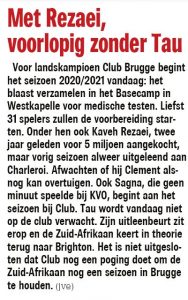 The newspaper, however, states Club Brugge making an attempt to sign the African on loan for one more season cannot be ruled out.

It’s still not clear if Tau will be eligible to represent the Premier League side during the next campaign. If not, both Brighton and the player will then have to find another loan solution this summer.